This is a view of the area in front of our workshop/greenhouse. Rows of plug trays filled with seeds & seedlings, trays of pots also containing seeds – some germinated, others newly planted.

Normally (if there is such a thing anymore) most of these seeds would have been sown directly into the ground, out in the fields.

But not this year. It’s just been too wet to get on the land, prepare the soil and seed!

Our options are – wait until things dry up and then seed in the field (which will put us behind) or seed in trays & then transplant the seedlings into the field later (hoping it is dry enough when that time comes). We are doing both!

So far things are working out. Our soil is amazing & requires only a day or two to dry off after a big rain. Some seeds have been sown out on the farm when possible including beans, edamame, some herbs … Under more ideal conditions we certainly would have planted more. And we have managed to transplant most seedlings as necessary. We’ve lost some that had to wait too long – but not a lot! Things are never perfect! But our CSA boxes will be full & the tables at market will have a good variety of produce. All in all we have little to complain about & much to be thankful for!

The forecast this week calls for a lot of sun. We expect to be able to prepare this field for planting in a day or two.

Meanwhile, the weeds are not waiting. They are loving all the moisture & now the warmth and growing like gangbusters. We have finished mulching the peppers & eggplant with straw – out attempt to beat the weeds. 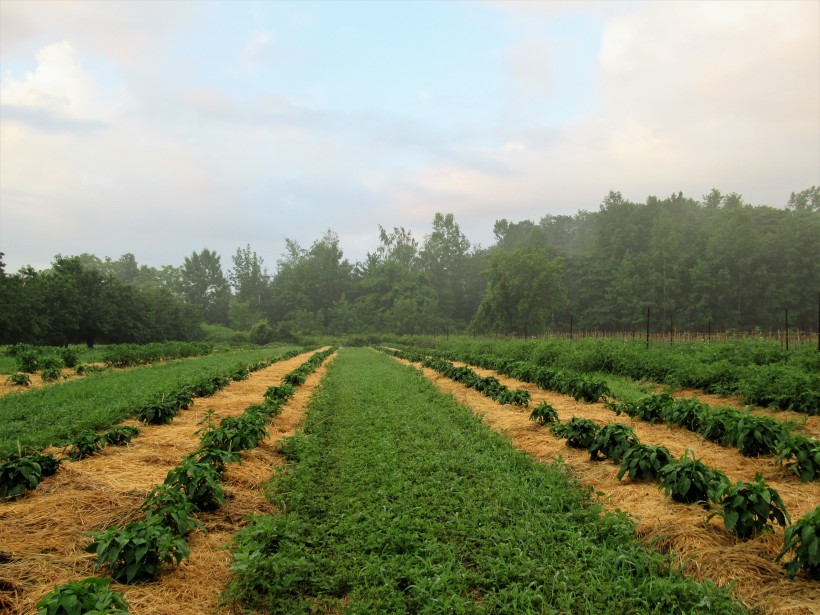 We were able to seed buckwheat where the early peas, spinach & lettuce were growing. It has come up nicely. The buckwheat’s role is to smother weeds now, which will reduce weed pressure next year.

Toss turnips with 1 tsp. oil, salt and pepper in a medium bowl.

Combine honey, cayenne and water in a small bowl.

Add honey mixture to turnips and toss them for a few minutes until glazed and tender. Add additional salt and pepper to taste.

(from  https://gourmandistan.com/2013/01/22/rocking-the-winter-csa-with-pan-roasted-hakurei-turnips/ adapted from Andrea Reusing’s Cooking in the Moment: A Year of Seasonal Recipes)

Thank you for returning all containers. We can reuse them!