As the temperatures outside increase, so does our work.

We spread a lot of straw! All the raspberries & blackberries got mulched with straw. The purpose of this is to control the weeds & preserve moisture. Often we use hay but last year’s drought caused a scarcity of hay. Straw works just as well and it looks fresh & clean too!

The berries are leafing out quickly now. Raspberries will be in short supply on our farm this summer. Most of our patch didn’t make it through the drought. We are replanting but the new canes will take a few years to reach full production. The raspberries that survived look short, but healthy.

The blackberries are looking good & we anticipate a great crop! 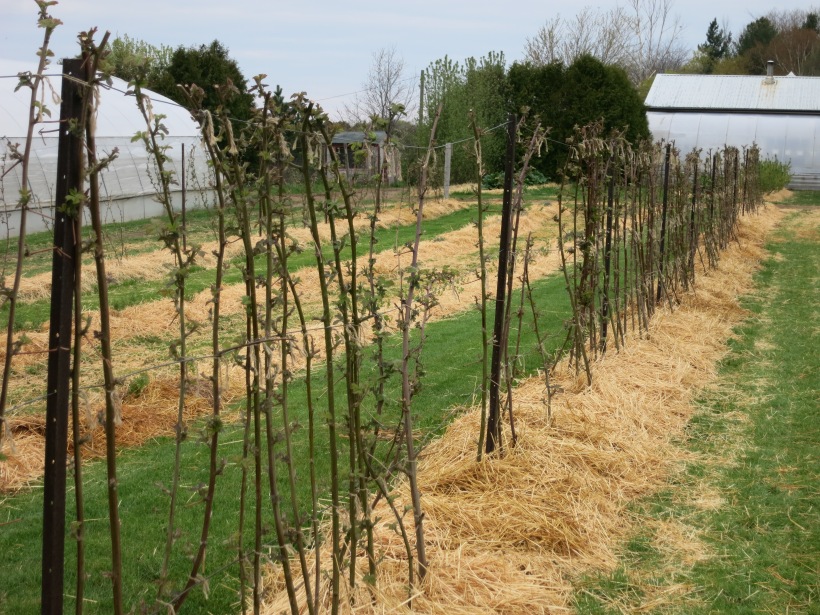 The rhubarb & currants also got a layer of straw tucked around them.

In the small greenhouse we continue to seed. 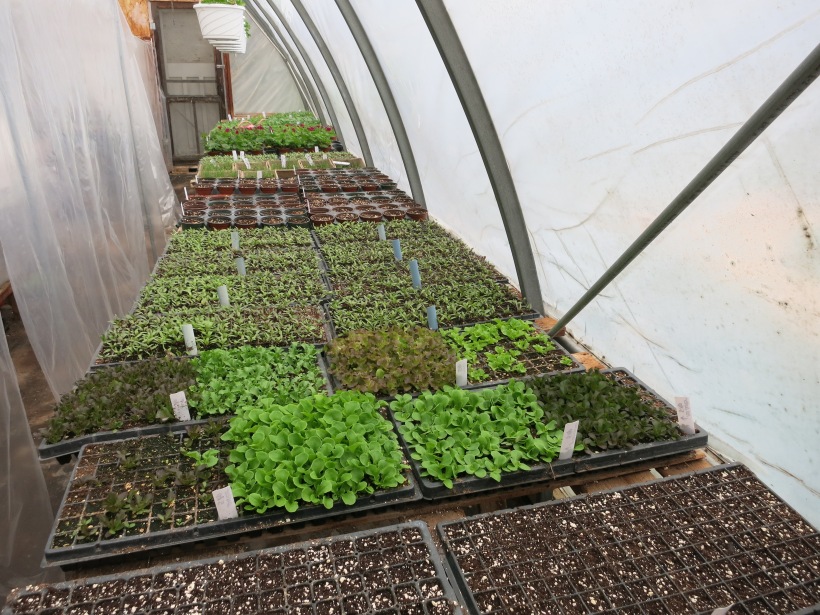 A part of each day is spent in the big hoophouse transplanting vegetables & herbs.

Usually Amy has a helper! 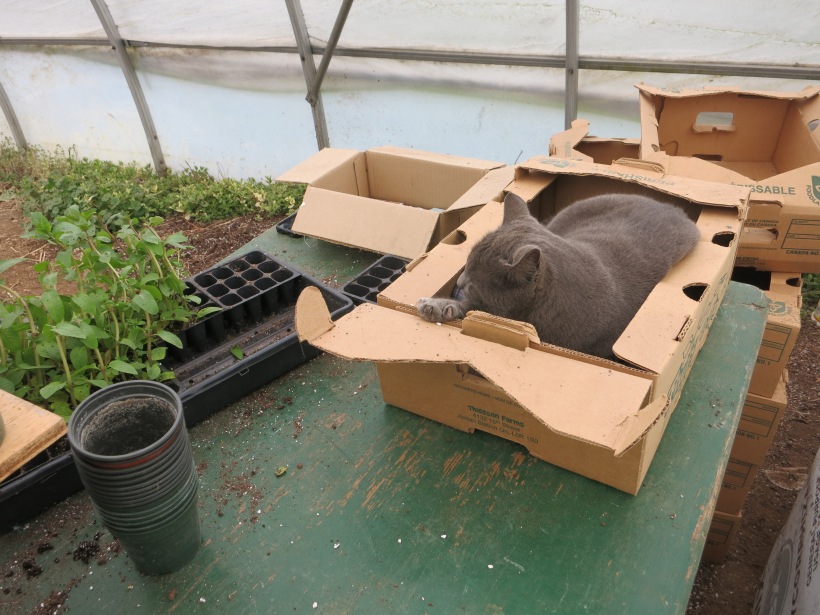 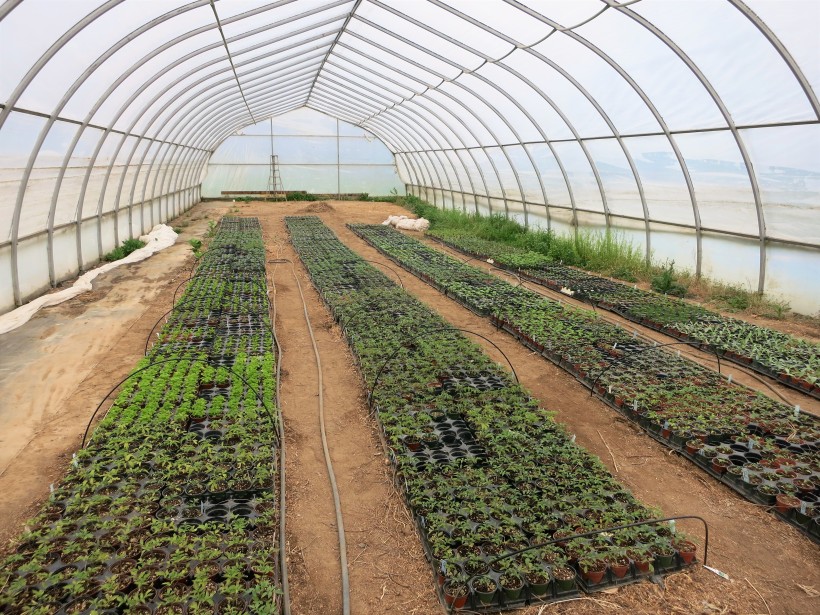 Already some vegetables are outside on the trailer, getting acclimatized to the outdoor temperatures & bright sunshine. They’re on the trailer so we can drive them in the barn when the nights are cold. 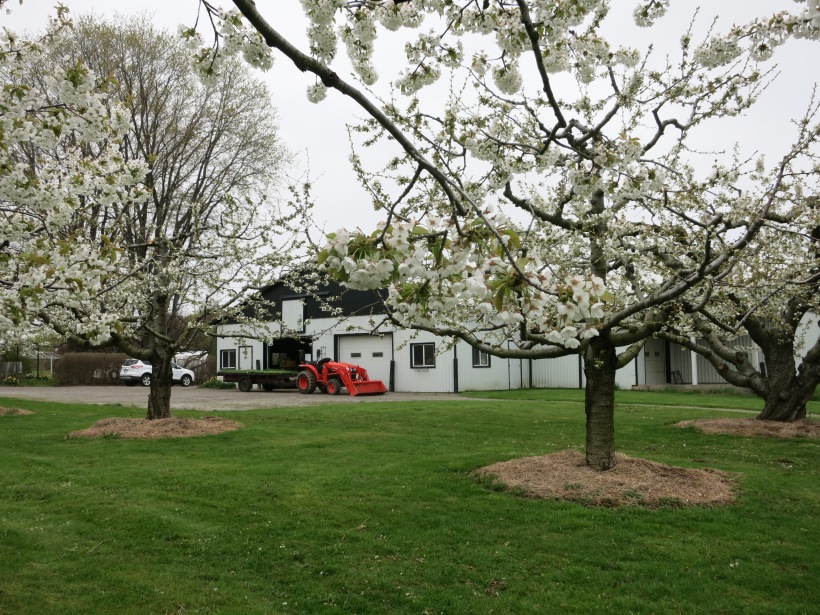 Next week these onions, broccoli, cauliflower & zucchini will be planted out into the field.

The garlic, that we planted last October has come up & is growing well. It also has been mulched with straw (back in December) so we won’t have to worry about weeding it. We still have a lot of round bales of straw which will be used later to mulch tomatoes, peppers, eggplant …

Our first 2 plantings of snow peas are up in the field as are spinach & lettuce.

In the low, white tunnels (plastic hoops covered with row cover, a fabric made of plastic filaments) we have seeded radishes & bok choy. The row cover acts like a mini-greenhouse enhancing the growing conditions inside – warming the air during the day, protecting from frost at night, and also acting as a barrier to hungry insects that are as anxious for fresh greens as we are! Crops grown under row covers can mature up to a week or 10 days sooner.

The black plastic mulch on the left in the picture was laid this week to warm the soil underneath. Next week we will punch holes in it, and transplant our zucchini seedlings. Then we’ll cover it with row cover as well. The goal is to get an earlier harvest of zucchini.

We are not usually keen to use a lot of plastic on the farm because of the waste & disposal issues. But the weed tarp & hoops can be used for many years, the row cover several times, and the black mulch is actually a biodegradable corn product.

Is the use of these materials & the extra work involved worth it? We’ll find out at harvest!

However, Oliver already gives a big paws up to the row cover! 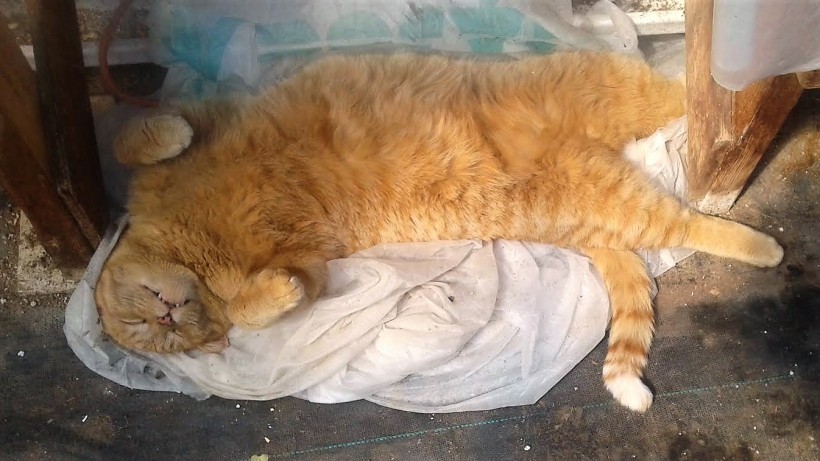 One thought on “This week on the farm …”