Just over 2 weeks ago (May 23) we had a late spring frost – and customers (at the farmers’ markets & CSA) are still concerned & asking how the crops were affected.

It appears that the fruit was not damaged. But various vegetables were. The artichokes that were already struggling due to lack of rain were totally wiped out. This was only our 2nd attempt at artichokes – last year’s crop was quite successful – and we are disappointed at this loss. Cauliflower was damaged badly, as was zucchini. We had extra zucchini plants & replanted – they just won’t be ready as soon as we had planned. Other crops were hit less severely such as snow peas & the new blackberry canes.

Here is an update on the fruit. The blossom petals have all dropped off, leaving the fruit visible. It is growing at a rapid pace!

Pears have a heavy crop.

Most plums have a nice crop.

The peaches vary. Some trees are quite light, while others have a full crop.

The early cherries don’t have a lot of fruit, but the crop is better on the later varieties.

The raspberries are looking very good – the bees were busy in the flowers today after the rain!

Asian greens (Friday only this week – Tuesday next week).

Here’s our favourite fruit crisp recipe. We make it all year-long with rhubarb or whatever fruit is available fresh or frozen. It’s easy, quick & delicious!

Spread this topping over the fruit and bake in the microwave for 12 minutes. Enjoy!

The lettuce that will be in the CSA box this week.

A few pictures of our first CSA pick-up of the season, last week … 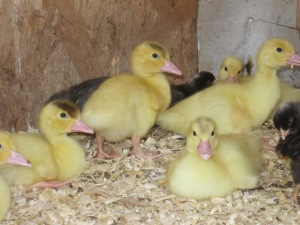